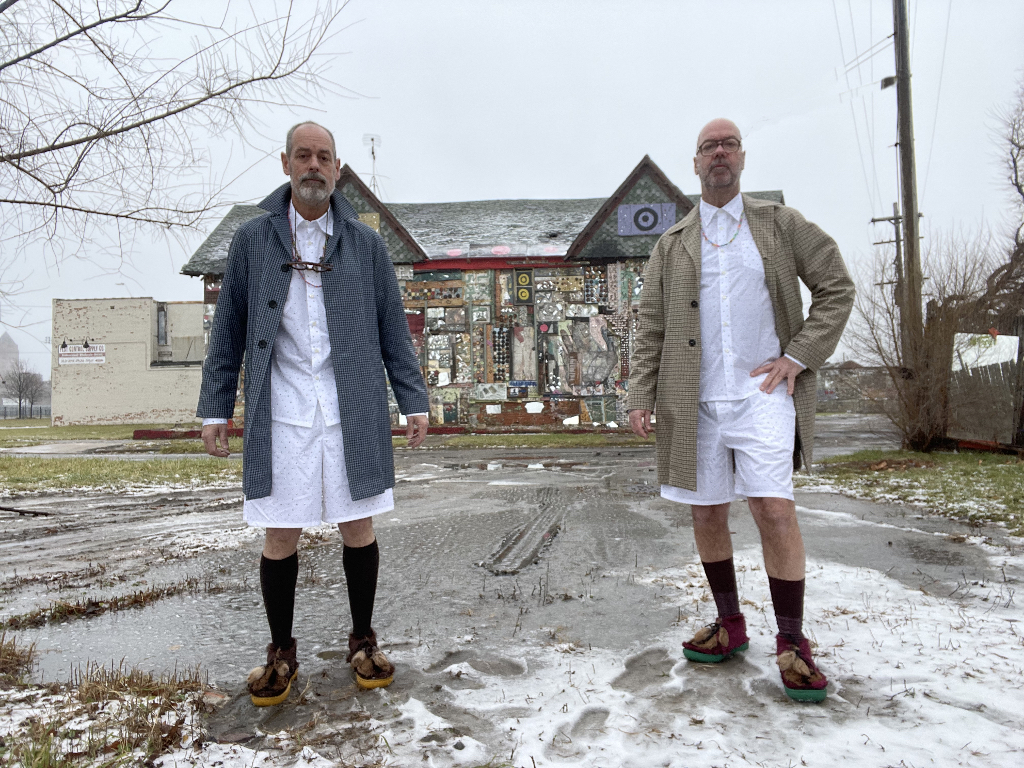 Brothers Frank and John Navin released six albums as The Aluminum Group between 1995 and 2008, each a meticulously crafted work of what might be called chamber-lounge pop. The long hiatus that followed ended this spring with a new eponymous release; and while the interim dozen-plus years might be expected to have altered either their sound or their point of view, “The Aluminum Group”—which reunites them with producer Dave Trumfio, who helmed their 1998 album “Plano”—is in every way a return to their utterly distinctive sound world. The only significant difference is that they’ve expanded their instrumental palette; chamber-lounge pop is now orchestral-lounge pop.

This is an unequivocally good thing, because there’s no one else who sounds remotely like these guys. Their tunes are breezy, melodic and infectious, and their lyrics startlingly wry and witty, with occasional undercurrents of darkness. (“Love never once looked back,” goes a not atypical lyric, “He laid himself down for a little nap / A feather pillow on an iron track”.) They’re also dauntingly literary; in one tune, references to “Gertrude,” “Sigmund,” and “Lucien” are casually strewn in, so if you’ve settled in for a garden-variety pop record, you have to sit up and readjust yourself in your chair.

Most beguiling of all are the vocals; both brothers have supple, intimate baritones that evoke the easy-listening stalwarts of the sixties and seventies—which creates an irresistible frisson when they croon sweetly about some minor cataclysm. (“You flip, you fly, through the intersection / You are charmed by your own acceleration / And you clip the man, holding up a cardboard sign / Why bother, why bother at all”) They’re like an existentialist Sandler and Young.

In late April I talked to the Navins about the record and how it came about.

It’s been fourteen years since your last album. Did you deliberately take a hiatus, or is it something that just happened?

FRANK: We had been writing still. Some of these songs started fourteen years ago, some started ten years ago, some five years ago. But as far as putting out an album—we had to finish up our professional lives in order to live. Because the music industry had changed so much that we weren’t going to make any money, as so many who had to take that road.

JOHN: Also, I was a teacher, and I retired, and Frankie and I bought a historic townhouse in Detroit, which we restored. So that took a lot of my creative energy. Frankie also worked in fashion for a number of seasons. So we had other things that we were doing. But Frank’s right, we would work on it sporadically.

It’s revealing to learn that you’ve been writing all this time. Because I have to say, after a fourteen-year gap, you stepped back pretty seamlessly into the Aluminum Group sound world that you inhabited previously. It’s like this album could’ve followed the previous one by six months.

Did you consider any alterations to your style to reflect this reality we’re now in?

FRANK: No, that’s one of the reasons we chose Dave Trumfio. I think he encapsulated our Aluminum Group sound the most. And the fact that we did this untitled album—we really wanted to make a classic album. And we do want to put this out on vinyl. And being a classic album, it’ll have five songs on each side, like American music did when vinyl was a viable thing.

JOHN: As Frankie said, we had this concept of a classic album from the seventies, where it’s kind of thematic.

FRANK: I think that it’s like a person’s signature. We didn’t start with, you know—“Oh, let’s sound like Wet Leg or the U.S. Girls.” We didn’t take anything current and infuse it in us and say “This is our sound.” Which just kind of relied on what we did before. Do you know what I’m saying?

Yes. There were no additional influences on you this time out.

What were some of the influences at the beginning, though? I can probably guess.

FRANK: Yes. That’s very, very accurate. And it was also the whole easy-listening side that we enjoyed. Which is kind of our demise. (laughter)

JOHN: We really had an idea of creating a certain sound. Meaning in that style of a [Harry] Nilsson album, or Neil Young, or James Taylor, Joni Mitchell—those kinds of albums where even though the songs are different, there’s a unifying thread and sound.

FRANK: I will always think of Carole King’s “Tapestry” as a classic album—all the components work together from song to song to song. And I think we achieved that more on this album than we did on any of our other albums.

JOHN: I agree. For us, it was successful, because it was something we visualized, and that was our inspiration. And we feel we accomplished that—even though Frankie’s songwriting and mine are different in a way, but it was the sound… And in that context, many of the choices that we made were for instance for initial tracking, were acoustic. We used a grand piano, drums—

JOHN: Then after we did so much work last March, Dave, Frankie and I were in Los Angeles, really getting our minds around—it was about eighty-five percent done—and it was to unify it, to approach (musicians) Paul Von Mertens and Max Crawford, and to let them listen, embody the songs. Frankie sent them charts and they each took five and then took the late spring and summer arranging, and then they assembled an orchestra.

FRANK: They made the charts. I sent them chords.

JOHN: We had used a really wonderful pianist. And then when Dave got involved, we ended up using Ziggy Marley’s keyboardist, Jason Borger, who’s a dear friend of Dave Trumfio; he’s amazing. And he sat with each song, and he and Dave sculpted each song. Really spent two weeks on these songs, each one.

FRANK: We had the final say, of course, because it’s our album. When I first heard it, I was reluctant—“Oh, my God, what is happening to these songs?”—but as I went on, listening to them, then I realized, they know the Aluminum Group better than we do.

I did notice the orchestrations; what impressed me was how lush and sculptural they were, while still having that lightness and intimacy that your work has always had.

JOHN: The genius was really Dave’s. What he was able to do with us, and help us achieve, was a complete blending.

Finally, I’d like to talk about the other side. Because I’m a big lyrics guy, and yours are very idiosyncratic. Again, I love their lightness, broken by those occasional glimpses of emotional wreckage.

JOHN: What are some of your favorites?

FRANK: We don’t mean to put you on the spot.

Here’s one [from the song “The Bait”]: “Like a hologram being carpet-bombed / You just sat there and took it in.” Damn. I hope you took the day off after you wrote that, because you earned it.

Oh, and there’s this lyric [from “The Beauty and the Beatnik”]; as soon as I heard it, I thought, “Oh, yeah. They’re back”: “The night ended soft, and the day came in hard / Like Karen Black, in a film by Godard.”

JOHN: Those two things you just read are both Frankie. I did say to him, “Frank, Karen Black was not in a film by Godard.”