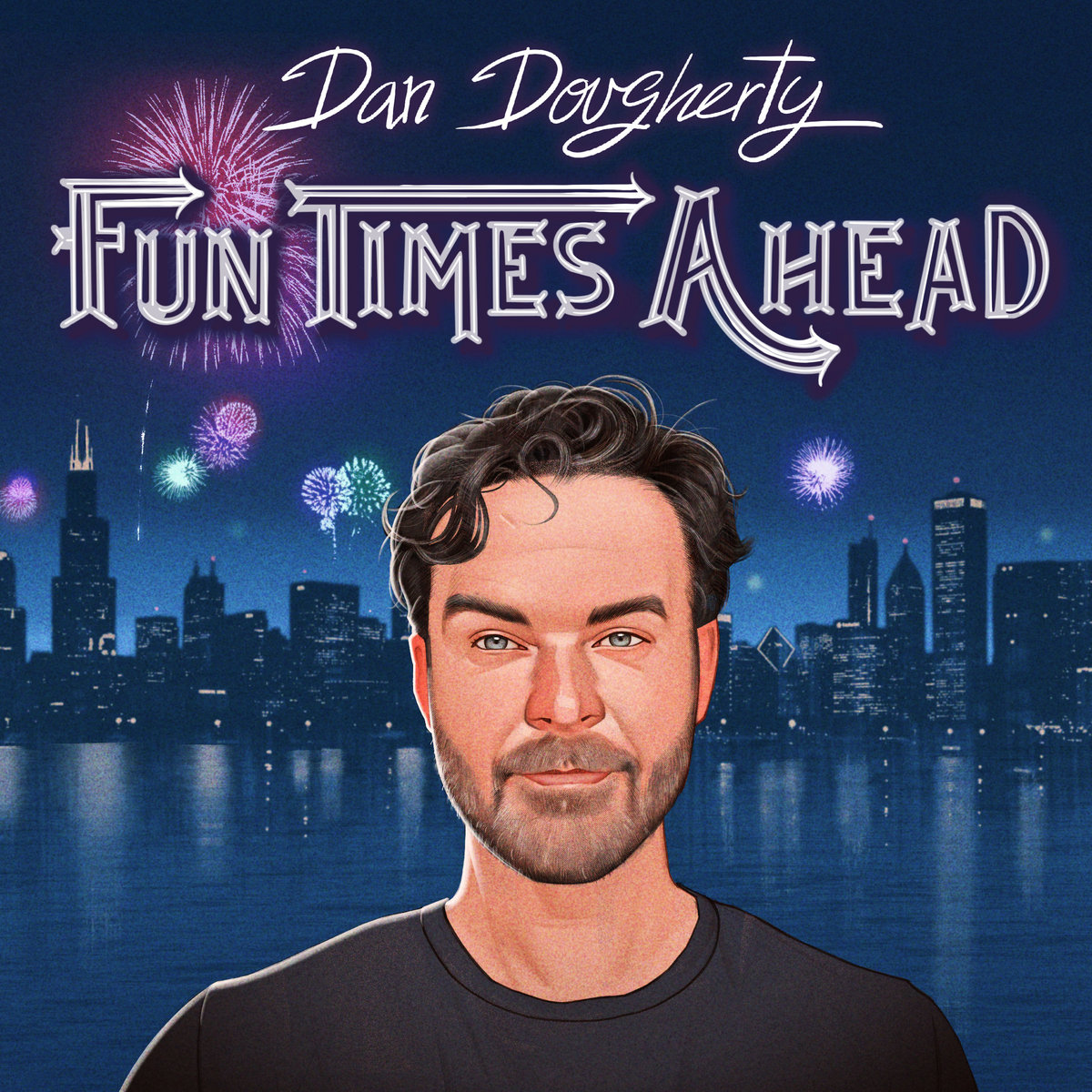 Singer-songwriter-multi-instrumentalist Dan Dougherty has been kicking around the scene for years—decades, even, though you wouldn’t guess it to look at him—but he hasn’t emerged as a major presence because he’s spent most of that time fronting one band after another. He finally released a solo album in 2020, and its follow-up, “Fun Times Ahead,” has dropped, and it’s a further testament to his range as both composer and performer.

What continually impresses me about Dan is that he’s absorbed—I swear at the cellular level—the entire corpus of rock ‘n’ roll, and gives it back to us with the same joyous intensity it had at its various flash points. There’s nothing on this record that even hints at the sheer exhaustion rock has suffered—no evidence of the gaping potholes on the highway it’s been riding for seventy years—there’s just energy, exuberance and exhilaration. For any rock fan who’s thought the genre might be settling into an arcane, scholarly niche, like jazz (if jazz indeed has—I’d argue), this record should serve as a welcome corrective.

I don’t want to imply that “Fun Times Ahead” is just a pastiche of rock’s past glories—though you’ll definitely hear tunes that evoke earlier eras, and God knows the album has enough killer hooks to fill out a Billboard Top 100 in just about any random month in the past half-century. What makes it both idiosyncratic and artistically coherent is that Dougherty employs rock ‘n’ roll to express, not teenage angst or countercultural rebellion, but the trials and traumas common to most of us either on the cusp of middle age, or firmly in its grip. The title tune, for instance, isn’t a paean to good times and endless summers; it’s an ironic evocation of the mindless way we drive ourselves beyond our capacity. “You can tell me I should slow down / I won’t hear you I’m running late,” Dougherty sings; “Gotta run myself into the ground / Gotta run the ship until it sinks.” The chorus is “Fun times ahead ’til the day we’re dead”—meaning, we’ll be putting off those fun times until it’s just too goddamn late. Though by the end of the tune, Dougherty has achieved a measure of insight: “Let ’em sink, let ’em swim / Let a her be a him / Let a hymn be a song / That will carry you home.” We’re just not entirely sure he’ll be capable of acting on it.

The songwriting throughout the album is topflight, and includes some epically fine lines set to insanely irresistible melody lines. The album opens with Dougherty wailing, “I am one of the greatest in the latest line of fools,” and you’re immediately drop-kicked into the twelfth row of a sold-out arena gig. Most of the tunes are arena-ready, in fact—including my favorite, a power ballad called “Go Getter,” which begins—again, with lyrics that summon up the enduring sensibility of rock ‘n’ roll—“Here’s a girl who needs no introduction / Here’s a boy who’s got something to prove.” Despite the intimacy of the tune, Dougherty sings it at the top of his register, and by the time he launches for the second time into the gorgeous chorus, I was hearing twenty-thousand voices singing along: “Hey go-getter, go and get her on your side.”

Dougherty is backed by a brilliantly tight band, with especially notable contributions from drummer Bret Figura, who absolutely slaughters on track after track, and Patrick Wright, who’s got a couple of trumpet solos on “Where in the World” that sound like something from “Sketches in Spain.” Dougherty himself totally shreds his guitar parts; but it’s his singing that’s the real standout. The album is impeccably produced, and while there’s a lot going on in any given track, it always sounds balanced, clean and polished; Dougherty’s vocals have the rawness and edge you’d expect to find on a live album. His range is jaw-dropping; on “Where in the World,” he ascends into a banshee howl on the line, “Where in the world, where am I now?” and that final syllable lands him on a dizzying E5—with a little flourish on G5, because why not, while you’re up there? It’s an uncanny moment, and the production plays into it, pulling back from the vocal and dissolving it into reverb.

“Fun Times Ahead” is basically a grown-up rock ‘n’ roll record for people who’ve grown up with rock ‘n’ roll, loaded with standout lyrics and dazzling musical ideas. Check it out on Dan Dougherty’s Bandcamp page. 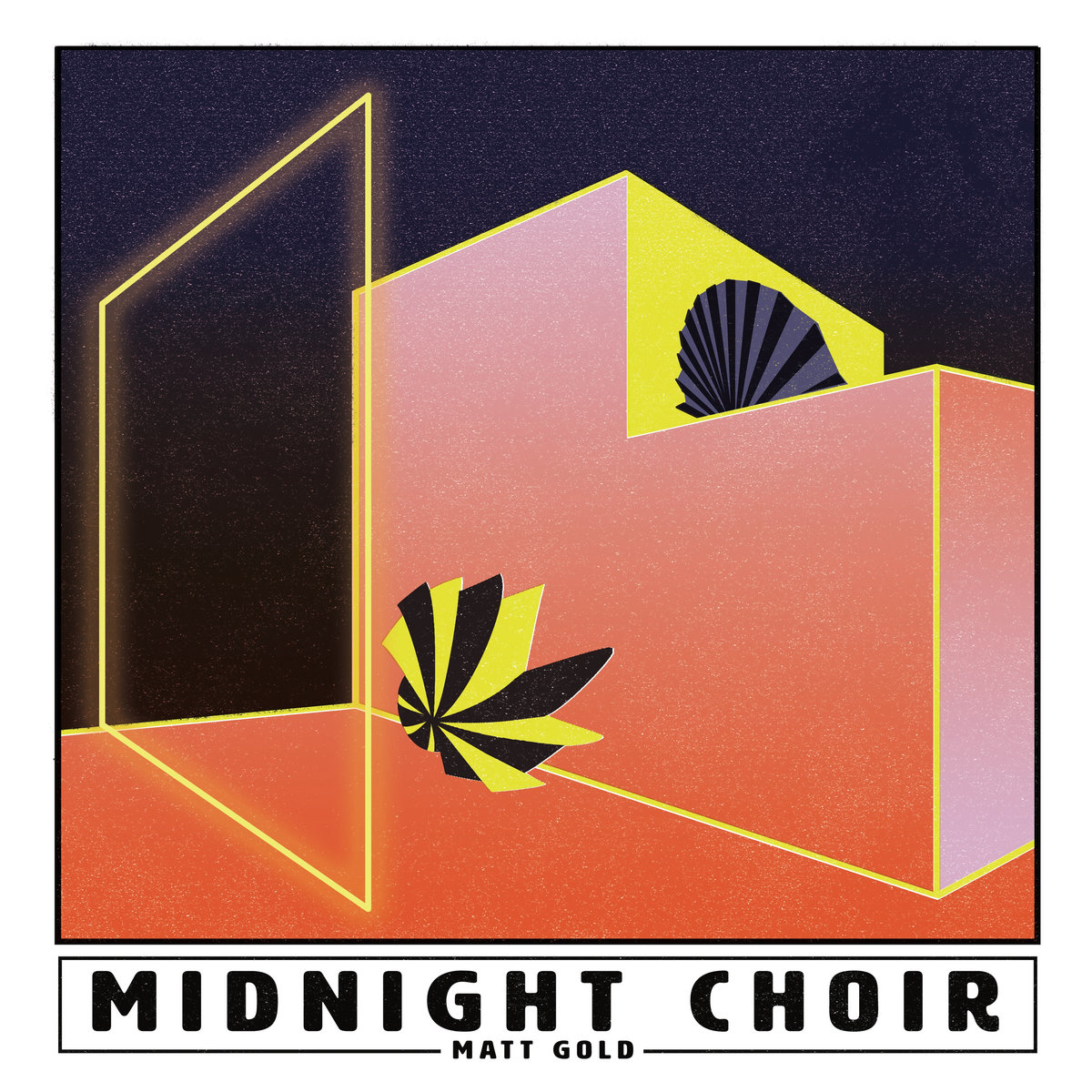 Matt Gold is another singer-songwriter-multi-instrumentalist who’s dropped a sophomore solo album that reveals an amazing sonic and textual range; but “Midnight Choir”—the title is a quote from a tune by Leonard Cohen, who’s name-checked in the first cut—is in every other way utterly singular, with its own highly distinctive sound world. Though that sound world has some very idiosyncratic regions; over the course of the album, Gold gives us everything from Americana to electronica. What it really is, in fact, is the geography of his own internal musical landscape.

“Internal” is the key word here. The press materials reveal that Gold wrote and recorded the album—playing virtually every instrument in its often very ample arrangements—while in pandemic self-isolation. In winter, yet. So yeah, we can see how that would lead him to explore “the conflict between isolation and interconnectedness, interior life and relationships.” Leonard Cohen’s “drunk in a midnight choir” was making music with imagined others; Gold, presumably sober, does more than imagine—he becomes those others, and the journey they take is necessarily inward.

The result is a lovely, surprising, and often very moving album. “Wave Over Me,” one of the standout tracks, is a kind of meditative embrace of inevitability (“There are things we can’t define / There is laughter where we can’t describe”) that traces itself in relaxed 6-8 time over a simple two-chord structure (C#m-B). But midway through the piece, Gold drops to F# and lets a playful mellotron solo demonstrate how much freedom there is, even within constraints.

The title track is another tune about inevitability—or rather the struggle to break away from the set patterns that ossify a relationship (“I’m under the weight of your oversized defensive ways / Holding up my revolutions”). Gold’s singing voice is small and intimate, and conveys the same kind of paradoxical authority as someone whispering at you from across a room; you listen more attentively because you don’t want to miss what’s being confided. And Gold’s lyrics are always worth hearing; he crafts passages like jewels, sculpting them so that they contain resonances and internal rhymes. In the sparklingly pretty “Remains,” he sings, “Waiting for my friends to call / Familiar drawl inaudible / Through unending sprawl.” And in “Sing Us Till Dawn,” one of the few tracks to feature a guest artist, Anabel Hirano sings “Vertigo, I’m taking it slow / A mean undertow / it’s low and shaking.”

Gold has built an estimable reputation as a jazz guitarist, playing with such luminaries as Makaya McCraven and Jamila Woods, and his guitar work is especially arresting here—ranging from a blistering electric solo in “Midnight Choir” to, in the very next track, a nimble, roots-tinged solo acoustic performance (“190 Proof”). It’s not the only such juxtaposition; near the end of the album he gives us a shimmering folk tune, paying tribute to a departed loved one, “Hazel, Friend of Mine,” possibly the best sustained performance on the album; you hardly breathe while listening to it—it’s so delicate, you don’t want to break its spell. It also features Gold’s best single line—in fact, one of the best lines I’ve heard in any song, anywhere, all year: “Love’s a funny thing / Takes your breath away / But without it I can’t breathe.”

And then, after this hushed, elegant, simple tune, Gold closes the album with the dreamy, synth-driven instrumental, “On Our Way Out”—which, true to its title, seems to be searching for a way to get to what lies beyond. It’s an arresting shift in tone and sound, but it perfectly resolves the arc we’ve been on: Gold has explored the full range of his ideas and ambitions—and now he’s ready to find what’s next. Can’t wait to hear where the journey takes him.

You can hear Matt Gold’s “Midnight Choir” on his Bandcamp page. The album release party is June 21 at The Hideout, 1354 West Wabansia; tickets $12.