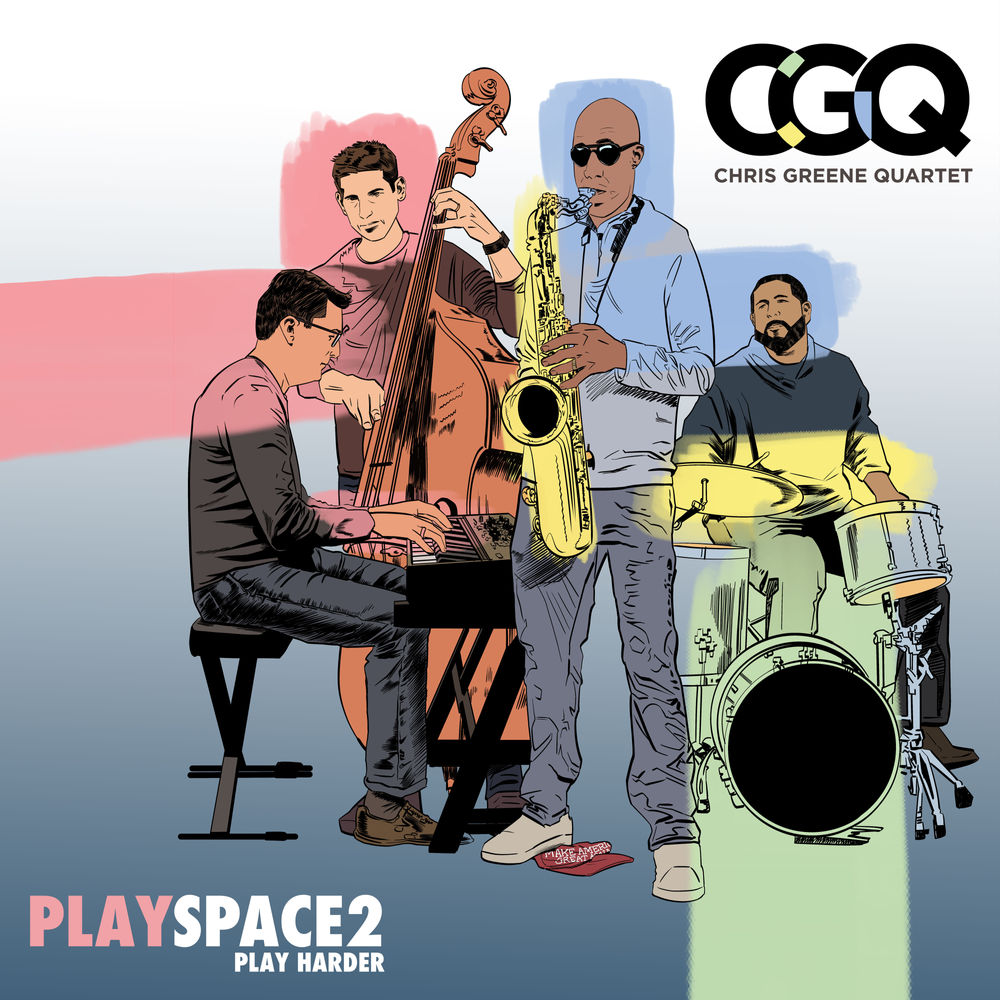 Chris Greene Quartet’s latest album is titled “PlaySpace2: Play Harder,” which clearly marks it as a sequel to 2019’s “PlaySpace,” which documented a performance at Evanston’s Space. But “PlaySpace2” is a stranger bird; it comprises five tracks from three different sessions—with one track not even recorded at Space.

That said, there’s no attempt to pass this off as a single document; in fact, the album opens with Greene announcing a change of pace, as if we’ve walked into the gig in media res. Greene warns that the tune to come isn’t for the faint of heart, then turns the mic over to composer Mark Piane, who explains that he wrote the tune—called “Divers”—after seeing a family in Door County swimming in a lake.

Initially, the tune does an impressive job of sketching the family members: hyper, splashing kids—chill, relaxed parents—but the intensity quickly heightens, with Greene’s sax skittering wildly all over the scale and Damian Espinosa’s piano chirping out in alarm. You have to wonder whether the family has accidentally awakened the Kraken. When tumult ebbs, Espinosa takes over with a line that starts tight and focused, then unravels, casting about in increasingly wider arcs while drummer Steve Corley sprays grapeshot behind him. Piane’s solo, by comparison, has a meditative, almost underwater quality, and Espinosa’s piano adds a sunlight-on-waves sparkle to it. Soon enough it surfaces, to where Greene’s chattering sax has been summoning it—and where Corley takes over with an exhilarating running-in-sand sprint to the end, where we find our family restored to their original attitudes.

It’s an idiosyncratic choice to open an album, but there is something for everyone in this dazzling, virtuosic set—from an R&B groove at the close of Greene’s “Samba Fu Maga,” to some churchified playing in Hank Williams’ “You Win Again.” Most of the tracks are north of ten minutes, which means each member of the ensemble—Greene on sax, Piane on bass, Damian Espinosa on keys and Steve Corley on drums—get ample opportunity to shine.

The quartet takes a measured, if calculated, approach to Duke Ellington’s usually briskly syncopated “Caravan.” Greene phrases with seductive, almost teasing languor, and the soloists all address the tune’s exoticism—alternately wallowing in it and affectionately commenting on it. Greene’s “Samba Fu Maga” opens with a charismatic line that starts with a swaggering strut, then resolves into a cool glide. Upbeat, confident solos; a real showpiece for the band—almost a statement of identity.

The real showpiece is the closer, George Duke’s “Omi (Fresh Water),” which serves up star turns for sax, piano and especially drums. The album may be a pieced-together simulation of a gig, but it’s bracing and adventurous—a real knockout.

“PlaySpace2: Play Harder” is available on the usual platforms (except Spotify), including Greene’s website. The band will be at Jazz Showcase (806 South Plymouth) for four nights, July 28-31. 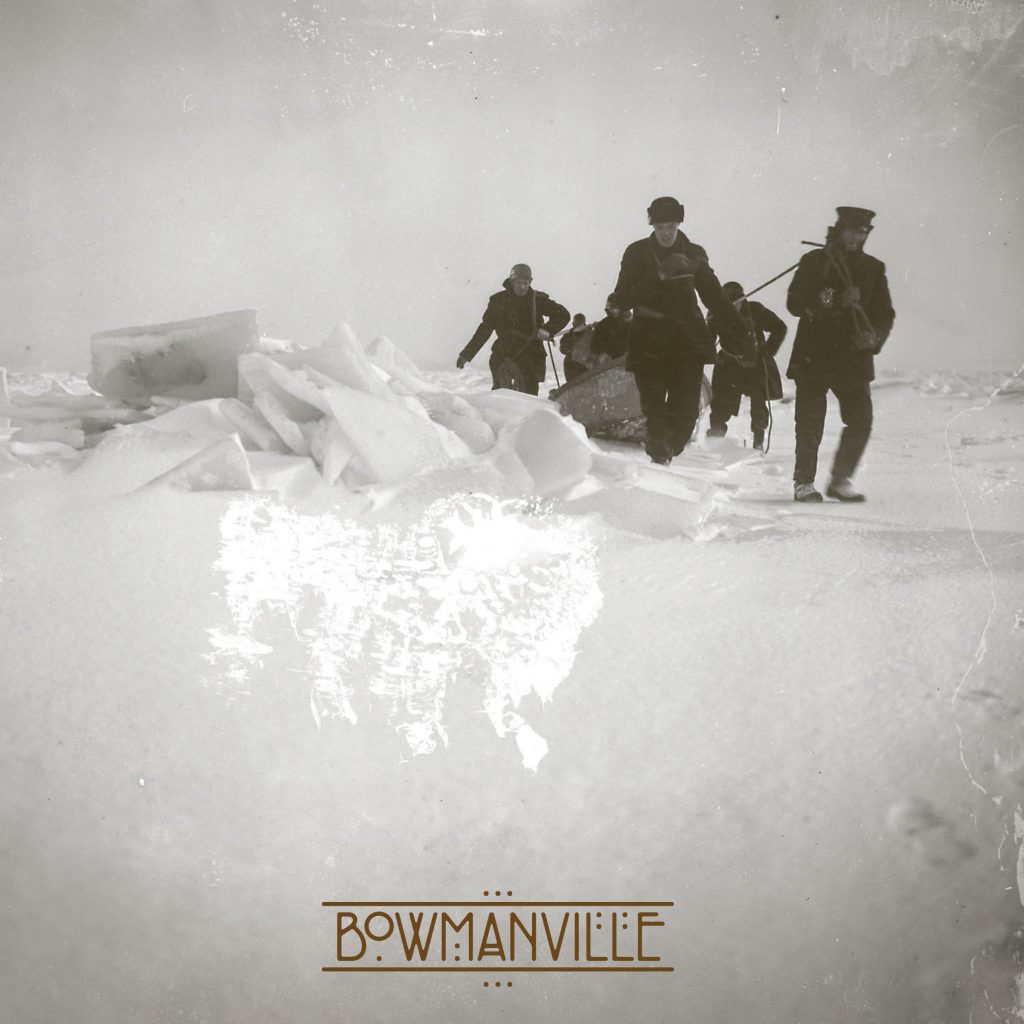 The quintet known as Bowmanville has become a fixture on the scene, due largely to their ability to swing the living hell out of whatever they do. The band—comprising founder Ethan Adelsman on violin, Graham Nelson on vocals and harmonica, Mason Jiller on guitar, Noah Plotkin on drums, and Oliver Horton and Ethan Philion (alternating on bass)—has just released its debut album, and it’s a burst of pure joy.

The track list is divided evenly between original tunes and covers of jazz standards. The opening track is an original, by Adelsman, called “Annie & Me,” and you learn everything about the couple of the title in the first several bars—which starts with a shoulder-shrugging riff by Adelsman’s violin, countered by a skittering scolding from Nelson’s harmonica. The argument continues for eight bars before the sheer charm of Adelsman’s playing wins the day; Nelson can only chime in with nods and assents. It’s a sparkling, witty, upbeat way to kick off the album, and gets wittier when guitarist Mason Jiller begins the solos with a quote from Thelonious Monk’s “Straight, No Chaser.”

Jiller’s own tune, “Metal Bird,” comes next. After a stumbling-down-the-stairs intro, Jiller’s superbly nimble guitar picks the tune up and navigates it through veering chord changes like something out of a James Bond chase scene. The whole track wouldn’t be out of place in a Bond film, actually. The solos are uniformly deft and exciting, and the tune comes to an abrupt halt after another run of descending chords, as though it’s just driven off a cliff.

The other original tracks are equally successful, including Adelsman’s “Helen’s Theme,” which features the album’s most beautiful melody lines, and Nelson’s set-closing “Weapons of Mass Distraction,” which is an unexpected burst of rockabilly.

The covers are great as well, but make less of an impression, if only because of their familiarity. “La Vie en Rose,” for instance, is so deeply in the band’s wheelhouse that it’s an easy slam-dunk. Plotkin’s drums are the highlight, kicking around tempos with the casual élan of a hacky sack player, and Adelsman’s ascending final line is just plain ravishing. “St. James Infirmary” is another easy choice, and features the best of Nelson’s handful of vocal readings; he’s got a sandpapery but supple instrument, and he growls, howls, whispers and purrs.

The band also covers “Caravan,” and it’s interesting to compare this track to the Chris Greene Quartet’s. Bowmanville’s begins with Nelson ululating far off-mic, like a Bedouin serenading the moon. And from there it goes all-out eastern, with the soloists engaging in dizzying flights over a single sustained chord, kept percolating by Plotkin’s cartwheeling percussion.

“Bowmanville” is available through the band’s website. The record release show is June 28 at Space (1245 Chicago, Evanston).