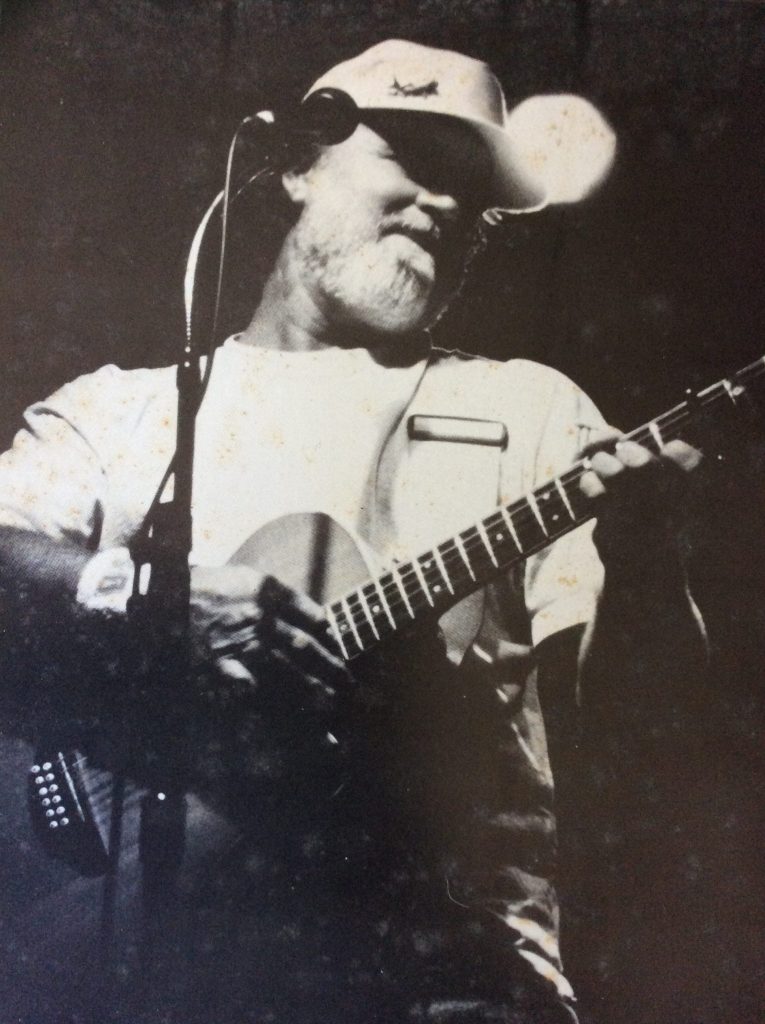 From Chicago to Cleveland to Put-in-Bay, a ten-drink-minimum kind of town on an island in Lake Erie, off the Ohio coast, I saw Pat Dailey play shows over several decades. He was celebrated around the Great Lakes region for his comedy music performances that took place during the summertime and in bars, including a headline slot at the world’s longest permanent bar, as measured by Guinness World Records. In his prime years from the eighties through the 2000s, Dailey and his guitar drew 3,000 thirsty, clamorous people to his shows on Put-in-Bay each night.

Having your living, your mortgage depend on the impulses, urges and attention spans of drunk people when your product isn’t alcohol, it’s yourself, requires a daredevil’s confidence.The salty peanuts on the bar won’t save you. You must know your audience for those few hours better than they know themselves. Do these people want to laugh at themselves tonight? Are they here to laugh at you? Forget their troubles? Remember the past? Or are they looking only for a soundtrack to make the suds go down a little faster, a little easier?

At times Pat Dailey worked blue, a style of comedy that foregrounds filth and lewdness at the expense of just about everything else. Bob Saget famously did blue comedy when not yukking it up on television with Joey and Uncle Jesse on “Full House.” While not Saget-blue, Dailey had a reputation for an edgy, adult show. Or put best in the liner notes by the man himself for his 1995 album, “Raw Bars,” the music was “Intended for mature adults (and boaters).”

Though neither of these myself, when I first heard him in college, his bawdy songs still appealed to me. I grew up on a mostly humorless music genre, grunge (ubiquitous flannels and bowl haircuts), and by the time I made it through high school, I was ready for a good laugh.

Some of Dailey’s lyrics read like an anthology of poetry from bathroom walls:

I like to sing, and I like to screw
Don’t matter to me which one I do
I go three hours long, and I never stop to rest
Just ask yo mama, she’ll tell you I’m the best 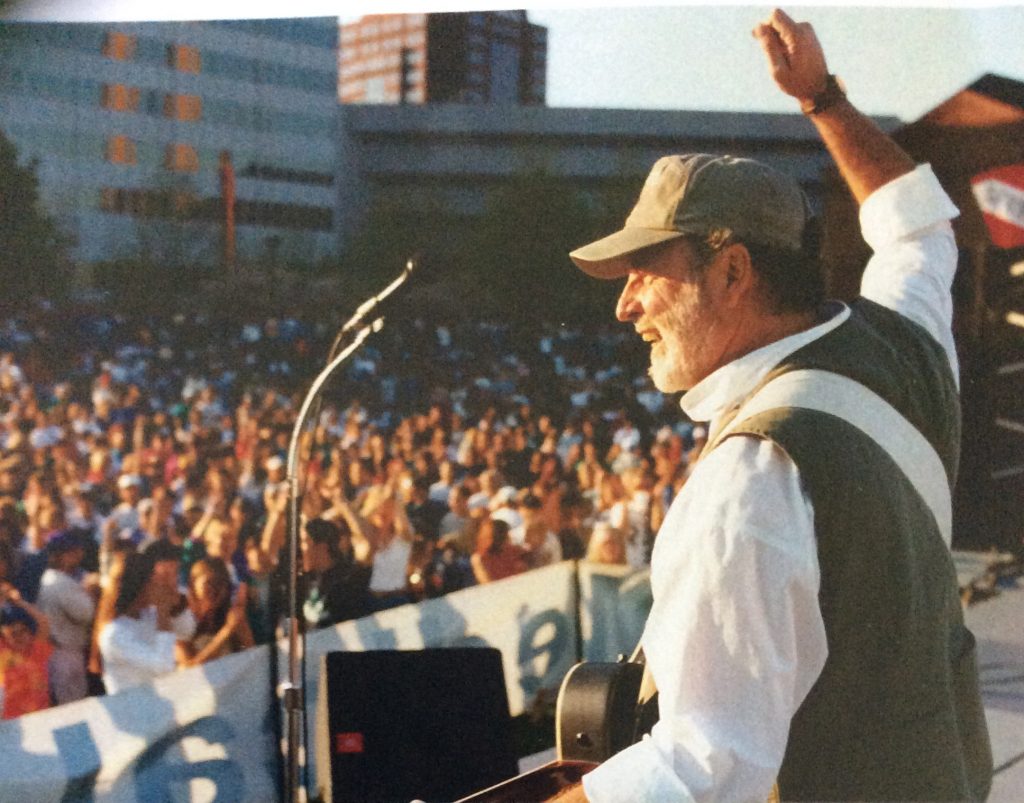 Some songs, like “Nymphomanic (Perfect Woman),” are best thought of as novelty numbers, outrageously silly, offensive and catchy; easy to remember and sing along to when you’re busy killing brain cells with booze: “We got all we need, the only thing that we lack, is a rich, dumb, young, nymphomaniac.”

When I speak to Wayne Federman, comedian and author of “The History of Stand-Up,” about this style of comedy, the origin of the term (it’s clear as mud) and why someone might choose to work blue over other genres, he tells me, “Your job as a comedian isn’t to do the most difficult material. Your job is to get the strongest laughs.”

Dailey delivered his lyrics and lines with a knowing smirk, sometimes a snicker, after saying something that might set the crowd off. As it happens, people like to be offended—to a point—and it keeps them coming back. (See social media.)

“His ability to hold a crowd’s attention, Pat’s a master,” Ray Fogg, a comedy-music performer also known as the Island Rock God, tells me when I asked about Dailey some years ago. “The number of distractions in a bar…”

Dailey figured out the crowd needed to be involved in his shows to avoid those distractions; drunk people have a need to be listened to, heard. The audience interplay in Dailey’s sets was dynamic. If he was doing his job, and the audience was a good one, they acted as a foil to his machismo and posturing: cutting him down to size with chants of “bullshit” to his boasts.

“I bet I’ve got the biggest boat of any sonofabitch in here!” Dailey’d announce.

Rebuffed, he’d reconsider. “OK, OK, OK. Maybe I don’t have the biggest boat. But I’ve got a whaler for a dinghy.” 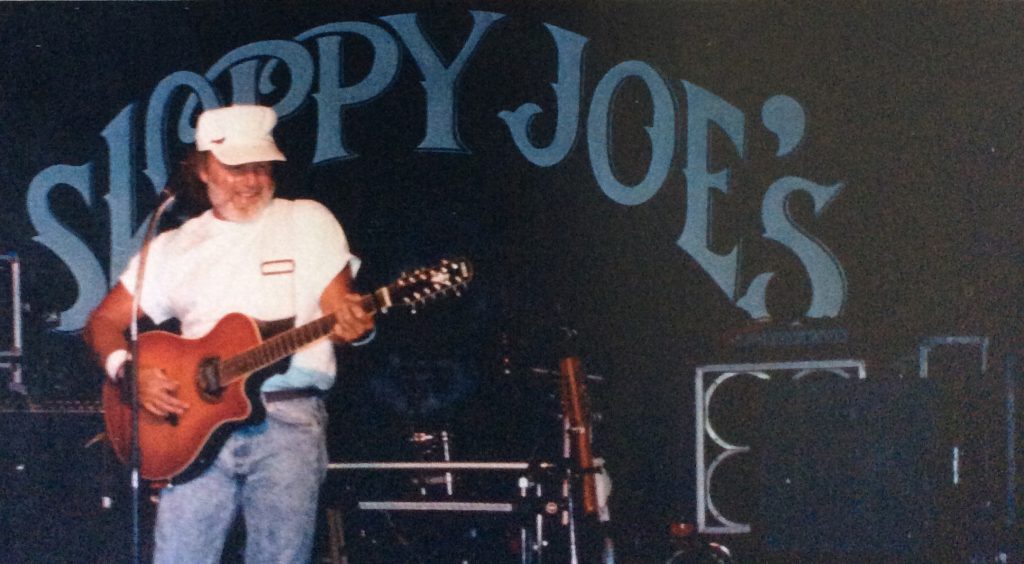 Dailey retired from performing a few years ago, but his influence is still felt in the waterfront communities he played. He had a winter residency at Sloppy Joe’s bar in Key West, understanding the seasonal migration habits of his northern audience. You’ll hear his songs coming through the front of open-air bars, the stand-up guitar-player comedian doing off-color bits in between. I’ve talked to and seen any number of performers who admire Dailey and cite him as an influence. On Put-in-Bay, his legend is that of a prized, elusive fish.

If he had been only “that” kind of performer, I’m not sure anyone beyond the barroom would need to know about his work and career. Sure, the blue comedy can be fun in the moment, but when you’re dragging your tired ass back to work Monday morning, bleary-eyed and still a little parched from all the drinking and yelling, it seems absurd.

It’s that other blue in a Dailey performance, water, that was bigger than the barroom, stayed with you longer than your buzz. He took the potty-mouth smartass wielding a guitar genre and chased it with a slug of Great Lakes freshwater.

Raised in Missouri, he learned guitar in high school and toured all over the West, struggling to gain a toehold in ski resorts and sawdust saloons as a singer-songwriter in the troubadour mold. He wrote some decent songs, like “Travellin’ Guitar Man”; got in front of Kenny Rogers’ people once. But nothing resembling a career was taking shape. Eventually, he found his way to the Great Lakes. It was a melding of man and muse that changed his life.

“I’ve seen the mountains in Colorado, the Grand Canyon,” Dailey told me when I met him toward the end of his career, “but nothing inspired me to write like the Great Lakes did.” 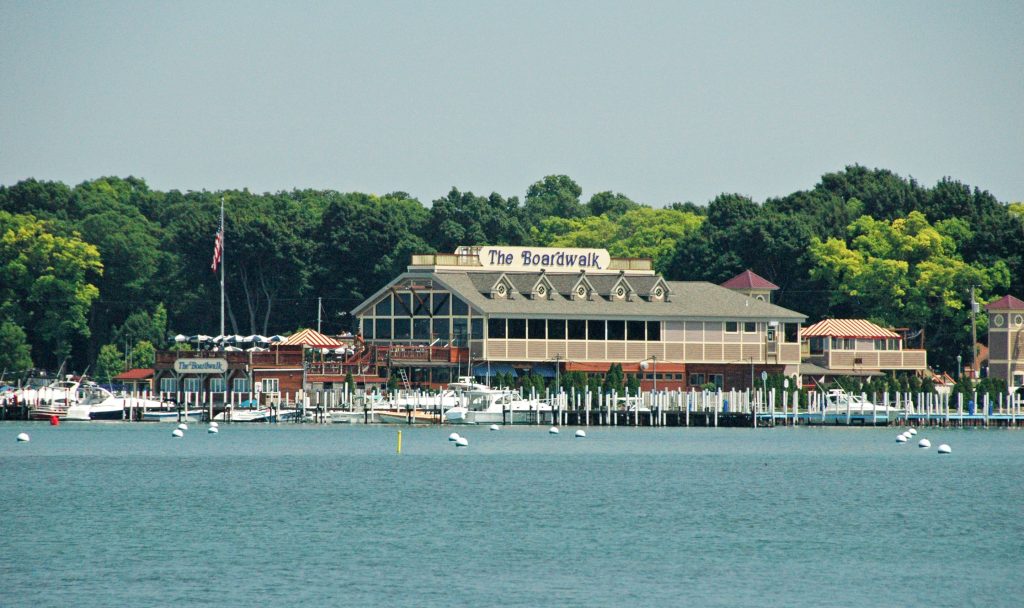 He romanticized the Great Lakes through his songs and started finding gigs in this region of the country. Andrew Christensen, general manager of Put-in-Bay’s Boathouse Bar and Grill at the time Dailey closed out his career there in the mid-2010s, told me: “People have a love for the Great Lakes that is expressed by Pat through his songs. His songs tell stories that people can relate to, stories that we have all experienced.”

Dailey’s song catalog contains a colorful document of life on the lakes, with song titles such as “Great Lakes Song,” “Put-in-Bay,” “Walleye,” “Walleye Willie,” “Legend of the Lake,” “On the Water” and “Here in the North.”

Ray Fogg, the Island Rock God, says, “You go on iTunes and seventy-five percent of the songs are going to be about love. And that’s great. But Pat found something else to be passionate about, the Great Lakes.”

One of his best-loved songs, “Great Lakes Song,” on which he collaborated with poet and lyricist Shel Silverstein (who he befriended in Key West), approaches the sublime in its depiction of the fishing life:

Down below the quarterdeck
The old men mend the fishing nets
While up upon the windy bridge
The young men curse into the wind
Up and down the Windsor Straits
The wives, the mothers lie awake
And pray our lady of the lake
Will bring them home again

Dailey could go from indecorous to majestic all in the same set, his baritone soaring to be heard over the commotion of a busy bar or rolled back to convey the truth as he knew it. For his fans, of which there are many, hearing their culture in Dailey’s songs heightens the experience of living on and near the Great Lakes, being from this part of the country.

Pat retired a few years ago after over sixty years of music and entertaining…In the mid-1970s, Pat Dailey brought his brand of music and entertainment to several Chicago venues owned by the Nordhem brothers, Jonny and Billy, among them POETS, a late night basement rendezvous, and BRIAN BORU’s in Old Town.

I met Pat & his friend Tim Mathews in Naples Fl many years ago and fell in love with his humor and songs. Sure hope he is enjoying Retirement.

First saw Pat Dailey in 1978 at Bobby McGees, a run down bar at 12 and Euclid in the area that became playhouse Square. The place probably held several hundred people and Pat had them laughing and singing and dancing and drinking all night long. As he use to say, Patrick Houston Dailey was one cool son-of-a-bitch, and he certainly was. Saw him dozens of times at Bobby McGees and The Beer Barrel Saloon and other places. I’ve seen a great many top performers in concert over the years but none of them compared to Pat when it came to… Read more »

Proud ‘Perfect Woman’ at the Beer Barrel, Boathouse and Sloopy Joes and other venues in between, and number one fan of Pat. Fell in love with him at the original Beer Barrel in the old Colonial at Put-in-bay and followed him wherever he went until his retirement. His music was the soundtrack of my life. I miss him and his performances like a death in the family. Those evenings with Pat were nirvana. There will only ever be one Patrick Huston Dailey, coolest sonofabitch in the world.

He will always remain “The Coolest Son-of-a-Bitch in the World!” Brings back a ton of fun memories. Thanks Pat!