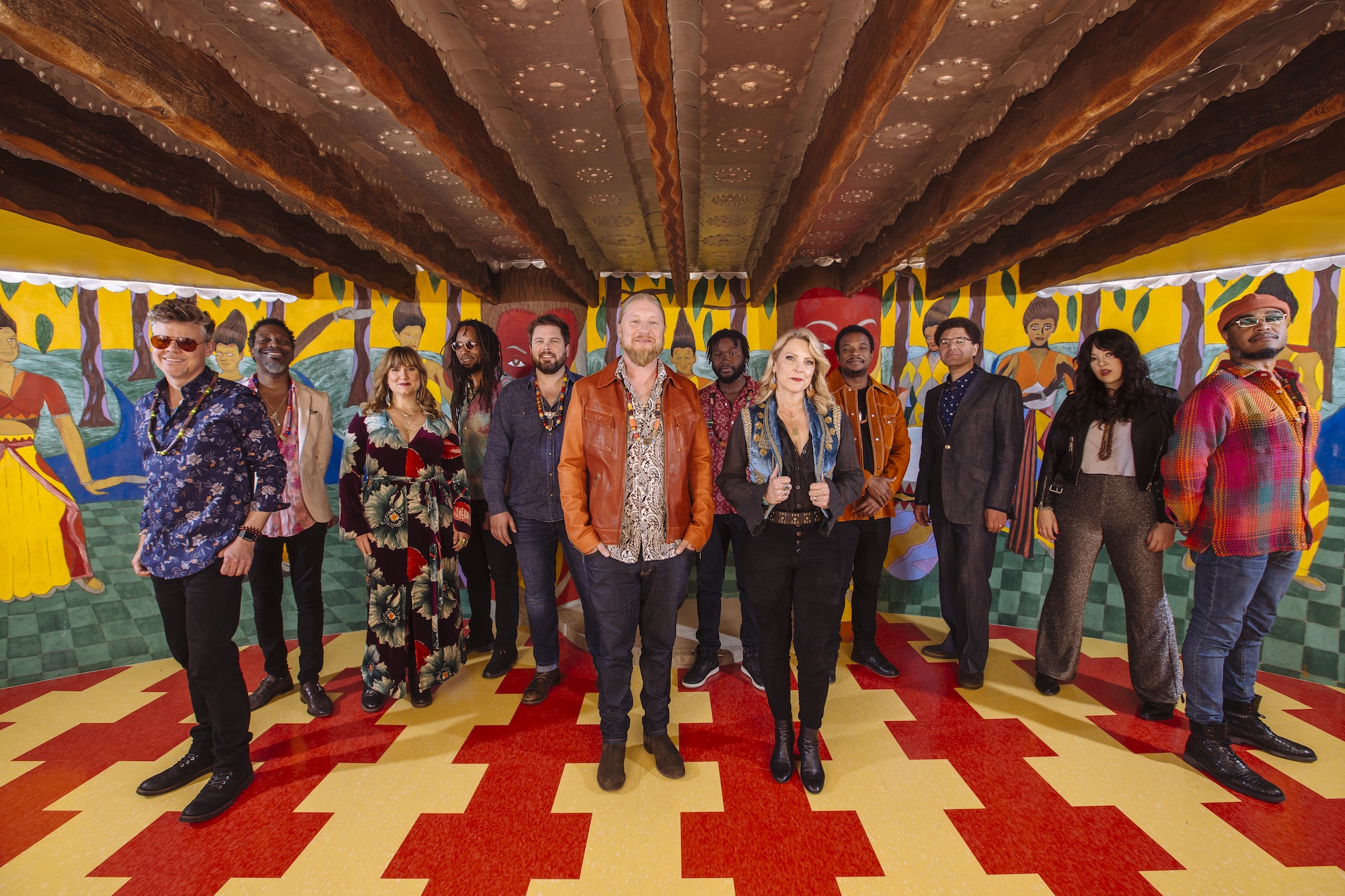 In a popular music era defined by singles, shuffle play and short attention spans, rock/soul revue Tedeschi Trucks Band is pursuing an unlikely path. The powerhouse collective led by wife-and-husband duo Susan Tedeschi and Derek Trucks has recorded a thematically linked set of albums—four in total—and is rolling them out on a timed-release schedule over the coming months. The first installment of “I Am the Moon,” titled “Episode I: Crescent,” was released June 3. The second volume, “Episode II: Ascension,” had a street date of July 1. “Episode III: The Fall” will be out July 29, and the final segment of the sprawling, ambitious work, “Episode IV: Farewell” will drop August 26. Each album release date is paired with a film premiere to match.

Concept albums—even ones with only the thinnest of narrative threads—can tend toward pretentiousness. But the street-level sensibilities of its creators, coupled with their passion and commitment to authenticity, means that “I Am the Moon” avoids that trap. Drawing inspiration from the same source Eric Clapton used when creating “Layla and Other Assorted Love Songs,” his own ambitious 1970 project made under the Derek and the Dominos banner, Tedeschi Trucks Band follows the inspiration in a very different direction.

Susan Tedeschi explains how the project got its start, noting that TTB has been performing the “Layla” album in its entirety; they released the live “Layla Revisited” last year. “While Mike [Mattison, vocalist] was reading the [lyrics] one day, he was inspired,” she says. “He said, ‘A lot of these songs, like ‘I Am Yours,’ were inspired by this poem, ‘Layla and Majnun.’”

Mattison suggested that he and his band mates go back to that source—the twelfth-century poem written by Nizami Ganjavi—and approach it from a fresh perspective. As opposed to Clapton’s take on the poem—a man’s longing for a woman and the journey upon which he embarks—TTB would flip the script. Tedeschi recalls Mattison’s creative challenge: “What about if we take it from her perspective, and [that of] other people who are affected by the relationship?”

Tedeschi emphasizes that while Nizami’s poem is more than eight-hundred years old, its underlying themes still resonate, especially now. “Women back then really didn’t have a voice,” she notes. “And nowadays, women are still fighting for a voice.” And the epic poem’s story line includes the female protagonist being locked away in a tower while the main male character goes mad in the wilderness, talking to animals. Tedeschi says that “for a long period, the characters don’t have human interaction with people outside of their immediate family. That can make you struggle with your mental health. It makes you realize how much we need each other.”

Against the backdrop of a global pandemic, those themes suddenly become far less abstract than they might have been just a few short years ago. “And the drinking of red wine,” Tedeschi adds with a laugh. “There’s a lot of wine drinking in the poem. During the pandemic, I saw a lot of people turn to drinking.” She suggests that the current-day imbibing she witnessed was less about getting drunk and more about “just trying to relax and decompress from so much stress.”

Finding themselves temporarily sidelined by the pandemic, the members of the band made the best of their time off the road. “Everybody was at home writing,” Tedeschi says. “We all read the poem, and we all started writing about things that came to mind, things that had to do either with our own lives, the pandemic or the actual poem.” Having several songwriters working toward a shared goal bore creative fruit.

Tedeschi enthuses that TTB keyboardist Gabe Dixon deserves an “A-plus” for his writing of the project’s title track. She says that the song embodied the foundation of the musical work: “Write something from Layla’s perspective, about how she felt about the relationship.” Tedeschi says that while she has long known of Dixon’s strength as a songwriter, she was surprised by “I Am the Moon.” “I was like, ‘Gabe, how do you know how women are? How do you know women’s [thoughts] so well?’” She answers her own question: “He’s married, he has a beautiful wife, and he’s a sensitive, beautiful, gifted guy.”

Mike Mattison’s “Fall In” comes in for similar praise. That song and others on “I am the Moon”’s four LPs “aren’t the same message,” Tedeschi says, “but they’re [inspired] by the same poem,” and informed by current-day concerns. “Falcon [drummer Tyler Greenwell] and Mike wrote lyrics like, ‘I can’t find my way home; I don’t know if it’s night or day,’” Tedeschi says. “There’s this sense of going mad.”

Tedeschi’s own “La Di Da” was inspired about her son heading off to college. “It’s like they’re going to leave you one morning; it just happens and comes without a warning. Parallels can come from real life or the poem.”

The creative wellspring of the Tedeschi Trucks Band’s twelve-member ensemble yielded a lot of worthy material. “That was the direction we just kind of went with,” Tedeschi says. “Whatever was a great song and really sounded strong and could carry its own was going to be part of the project.”

But all that music added up to much more than an album. That reality led to re-envisioning “I Am the Moon” as a project on an even grander scale. “Once we realized how much music we really had, we [asked ourselves], ‘What are some of our favorite albums?’” Tedeschi recalls. Husband Derek named John Coltrane’s landmark 1964 jazz LP, “A Love Supreme.” “It’s like thirty-five minutes,” Tedeschi notes. Another album mentioned was Jimi Hendrix Experience’s “Axis: Bold as Love.” “That’s like thirty-four minutes,” Tedeschi says.

Those albums—concise at least in part because of the limitations of the vinyl LP format—made indelible impressions on the musicians. There was something just right about their relative brevity. “So,” Tedeschi explains, “we realized that if we split up [“I Am the Moon”] in a way where people could digest the music and enjoy it and not be overwhelmed or inundated with too much music at once, we could actually tell this story better, let it kind of sink in a little at a time.”

Each of the four albums—set for vinyl release in September as well—has its own distinctive character, and provides a rewarding listening experience. It’s not strictly necessary to listen to all four records to appreciate the messages and the music, but it helps.

Susan Tedeschi says that there were multiple foundational goals within the project: “Tell the story, keep it moving, keep [the listener’s] interest in each one, and show how they’re all tied together.” But there were other concerns as well. “We wanted to spread out the different singers and styles. It was a combination.”

Past TTB albums have come together comparatively quickly. The group’s standard approach has been to schedule studio time whenever the band is off the road. This time, things were a bit different. “We were working on things at our own homes, alone, and then brought things together in August of 2020,” Tedeschi says. “That was the first time we sat down and really started to write.” The group initially worked as a trio—Tedeschi, Trucks and Mattison—and eventually brought in more members. “In August of 2021, we started touring as the twelve-piece again.” In the end, the making of “I Am the Moon” took nearly two years.

“I Am the Moon” has a thematic unity through its lyrics, but the high-flying instrumental interplay that has always been a TTB hallmark is showcased as well. Although the lyrics are a key to its strength, some of the project’s strongest moments are found on a twelve-plus minutes instrumental, “Pasaquan.” That track spotlights the TTB’s jazz sensibilities, and reveals a character similar to the Butterfield Blues Band’s groundbreaking 1966 epic, “East-West.”

“This is really the first project that we’ve done as Tedeschi Trucks Band that really shows Derek as the instrumentalist as he is,” Tedeschi says. She believes “I Am the Moon” spotlights Trucks’ “ability to stretch and improvise, incorporating world music and his Allman Brothers roots.” She sees the new suite of four albums as an exemplar of “all these beautiful qualities that this band has.”

As the group returns to concert stages—including, on July 26, RiverEdge Park in Aurora—their live approach to the new material reflects the way it’s being rolled out for release. “We won’t play anything that hasn’t been out either on record or on YouTube with the film [with which] it coincides,” Tedeschi says. “Then as the summer goes along, as each record gets released, we’ll start incorporating more songs.” She chuckles a bit as she reflects on the TTB’s massive body of work. “So, instead of a hundred songs, we’ll have 124 songs to pick from.”

Tedeschi concedes that the manner in which many listeners experience music in 2022 doesn’t always lend itself to the album (or multi-album) format. “People can listen to anything in any order once they get it,” she says. And TTB took that into consideration when creating “I Am the Moon.” “It’s important that [the songs] stand on their own, which means they have to be great songs,” she says. “And ultimately, “I feel like all these songs that we chose can do that.”