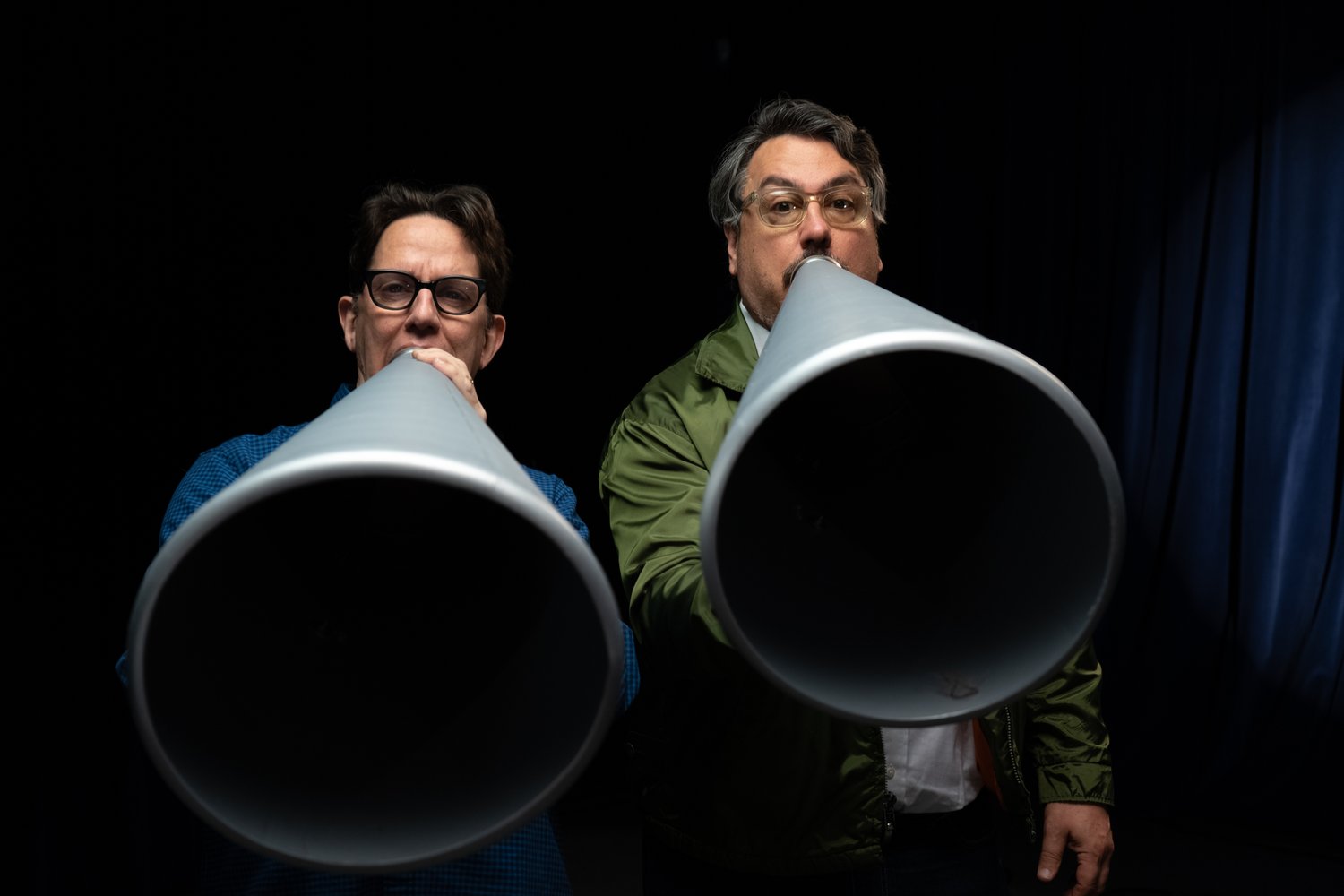 Two years ago, singer-songwriters John Flansburgh and John Linnell, collectively known as They Might Be Giants, were scheduled to set forth on a tour celebrating the thirtieth anniversary of their major-label debut, “Flood.” Like nearly every tour that year, it was abruptly and indefinitely postponed. This June it finally got under way, with a Chicago show on the docket October 13 at The Vic Theatre. The victory lap is scarcely undermined by the delay; if anything, celebrating a thirtieth anniversary after thirty-two years is a very They Might Be Giants thing to do. Who knows? If it goes well, they might end up celebrating the fortieth anniversary when the album turns thirty-seven.

“Flood” is certainly worth celebrating: its startling originality, wit and weirdness made it unlike anything in mainstream music of its time, and if today it seems bizarre that the A&R execs at Elektra Records thought they could make rock gods of buttoned-up brainiacs like Flansburgh and Linnell… Well, it seemed bizarre then, too. And the duo themselves knew it. Remarkably, Elektra pretty much opened its resources to the two Johns, and then got out of their way. As a result, “Flood,” for all the playful impenetrability of its lyrics and the structural wackiness of its music, came across as entirely genuine… even personal.

In 2014, S. Alexander Reed and Elizabeth Sandifer published an incisive (and very entertaining) monograph on “Flood” as part of Bloomsbury Publishing’s indispensable “33 1/3” series. For anyone seeking a critical breakdown of the album, it’s a must-read. In fact, it’s so exhaustive in its survey of the tunes, their creators, and the world that gave them their singular context, I was at first reluctant to dip my own critical toe into those waters.

And yet 2014 now seems very, very long ago; and what I find myself most noting, as I sit through my first concentrated listen to “Flood” in more than a decade, is how much of an artifact it seems; I might even say how much of a relic. Put simply, with streaming finally taking over as the means by which most consumers get their music, no one today would make an album like this.

“Flood” was designed to introduce They Might Be Giants to the larger world—and not just as a band, but as an experience and as an aesthetic. As such, it’s structured like a song cycle; until now, I’d never noticed how much of the album depends on linking what you’ve heard with what comes after it. The album even opens with what Linnell has called “a ceremonial archway”—an introductory fanfare, sung by a chorus and backed by brass, the lyrics of which are both tinged with pomp and faintly alarming:

Why is the world in love again?
Why are we marching hand in hand?
Why are the ocean levels rising up?
It’s a brand new record for 1990
They Might Be Giants’ brand-new album, “Flood!”

Not only is this kind of cheekiness and wit utterly distinctive, it’s an urgent invitation—almost an order—to settle back in your chair and stay put until the entire album has played itself out. Which is, really, the only way anyone was ever going to “get” Flansburgh and Linnell. Single tracks, devoid of the albums’ context, can only have come across as novelty tunes. In fact, they had only one top-ten single, “Birdhouse In Your Soul,” which is sung from the point-of-view of a bird-shaped nightlight (“Blue canary in the outlet by the light switch / Who watches over you’). It’s insanely tuneful and deftly produced, which may be why it charted; but it wasn’t ever likely to lead the band to a huge career in radio play. For one thing, the lyrics were just too strange, and in their references, spikily sophisticated. And at one point the night light sings:

Over the course of the album, the band keeps roping in different genres to play with and subvert—and they aren’t genres anyone in 1990 would have dreamed of finding on an alt-rock record. “Whistling In the Dark” is a straight-up march; “Women and Men” is a sea shanty.“Dead” is basically a Protestant hymn—solo piano and voices, every beat landing with Sunday-service bluntness. By contrast, its lyrics—sung from the point of view of someone recently deceased—nimbly up-end any expectations: “I will never say the word ‘procrastinate’ again / I’ll never see myself in the mirror with my eyes closed.”

Then there’s “We Want a Rock,” which is a dizzying folk reel with some infectiously gleeful fiddling. The message here is a diffuse swipe at consumer culture… I think.

There are nineteen tracks in all—a few of them admittedly just a few brief measures, and most clocking in at under three minutes. But together they provide as comprehensive an introduction to this staggeringly smart, audaciously witty and ferociously musical duo as anyone could ask for. Elektra got what it wanted, ultimately; if not quite an arena-filler, at least a band that could build a catalog. (Flansburgh and Linnell made four albums with the label, all of them brilliant.)

This is a story that’s unlikely to be repeated. A lot has been said about streaming, but one of the behaviors it’s made possible (even habitual) is bailing on a tune that doesn’t immediately make a connection. Whereas someone who purchased “Flood” in 1990 had made a literal investment in the album, which was an incentive to hear it through in full before passing judgment. Sustained attention: that’s the only way complex, idiosyncratic innovators ever get through the door.

Flansburgh and Linnell are doing fine, of course—and still managing to delight and surprise. Last year They Might Be Giants released “Book,” an album-slash-hardcover volume that features both full-color photography by Brian Karlsson and song lyrics rendered as concrete poetry by designer Paul Sahre (on a vintage IBM Selectric typewriter, no less). Not quite so spectacularly, but equally audaciously, Linnell released a solo EP, “Roman Songs,” of typically Linnell-sounding tunes, written and sung entirely in Latin.

It’s their heirs who concern me. Streaming has so shortened the average music consumer’s attention span that it’s going to take a lot more ingenuity—and a hell of a lot more luck—for the next Flansburgh and Linnell to make themselves heard, much less understood. Keep your ears open. And your mind, too… the one behind that prosthetic forehead. Deep down, everyone still wants one, you know.