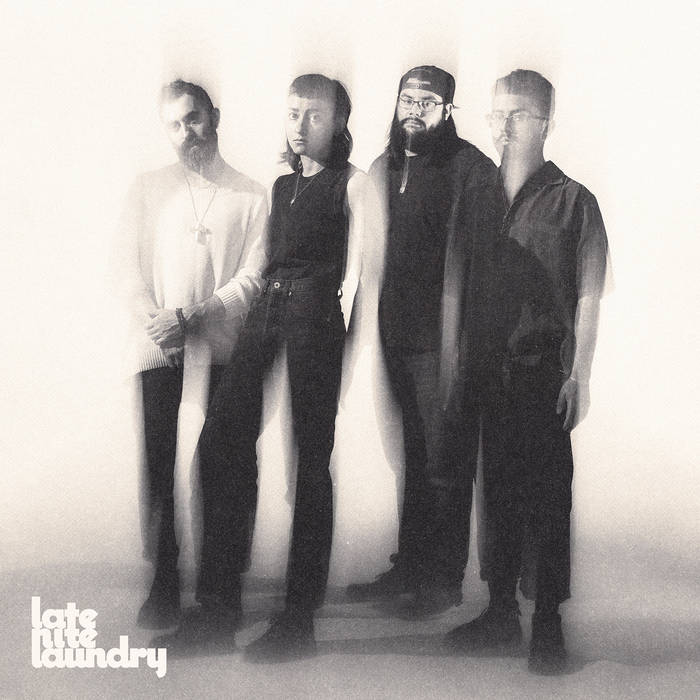 The latest EP by the newly reconstituted Late Nite Laundry begins with a fake-out. A drumbeat fade up, increasing in volume until you’re ready for the tune to burst open like a piñata; but when the verse does come in, it’s like a pebble dropped into a pond, and the tune that follows is a gorgeous ripple of summery psychedelic soul.

If the first track of a record can be considered its mission statement (I’d argue), this one couldn’t be clearer. After having its momentum arrested by the brick wall of the pandemic and subsequently losing its lead singer, the former quintet has had to reform as a foursome, and to decide who that foursome would be. Based on the EP at hand, they’ve stepped pretty confidently into their new identity.

“Late Nite Laundry” gives the band a new set of influences, including bedroom pop, lounge and R&B. “Hold” owes its principal debt to bossa nova, most notably in the way guitarist Ari Lindo and bassist Emily Burlew (the band’s new vocalists) sing each note slightly ahead of the beat. I hadn’t realized before how much that simple stylistic choice helps forge a seemingly incongruous duality of breezy languor and forward propulsion. (They do it again, two tunes later, in “Hi, Can You Hear Me?”)

There’s an appealing ambiguity to the lyrics, as well. “Hold” is about taking inventory of a long-term relationship, and deciding what to hang onto, and what to let go, before moving on.

Break
Pull apart the pieces
Savor the taste of
The bitter and the bruised
Was I cared for or used?

Like the best bossa nova, there’s real iron in this tune—structurally it offers up surprise after surprise—while sounding so airy and light the band might be making it up on the spot. Definitely one of my favorite tunes of the year, and the rest of the EP is likewise addicting. “Sizzle” is a rumination on shifting from physicality to spirituality (“Succumb to pressure / Of illness and age / Wearing a smile / While our bodies decay”). “Hi, Can You Hear Me?” is as close as the band gets to a sense of urgency, and even here the plea for attention skews more toward persuasion than desperation (“Hi, do you miss me? / I’ve been right here but you still shut me out / You’re expecting / Someone else to come figure it out”).

The EP concludes with “Floating,” which was released as a single prior to the EP, and it’s got its ambiguity as well. The arrangement does feel cloudlike, as Lindo takes a long-distance look (“Sky, sky-lit view”) on a love affair that might or might not be ending; but at the end of the tune, it’s the lack of any kind of epiphany that leaves the lover not so much afloat as still anchored in his dilemma. The track gives everyone in the band—including keyboardist Brenden Cabrera and drummer Alex Santilli—time to shine, and in fact both Lindo and Cabrera get the opportunity throughout the EP for some athletic solos. The entire band is to be commended for achieving such a rich, warm sound when they basically recorded, produced and mixed the EP themselves. Stripped-down yet sumptuous: there’s yet one more duality on a project that’s full of them. As reinventions go, Late Nite Laundry sticks the landing.