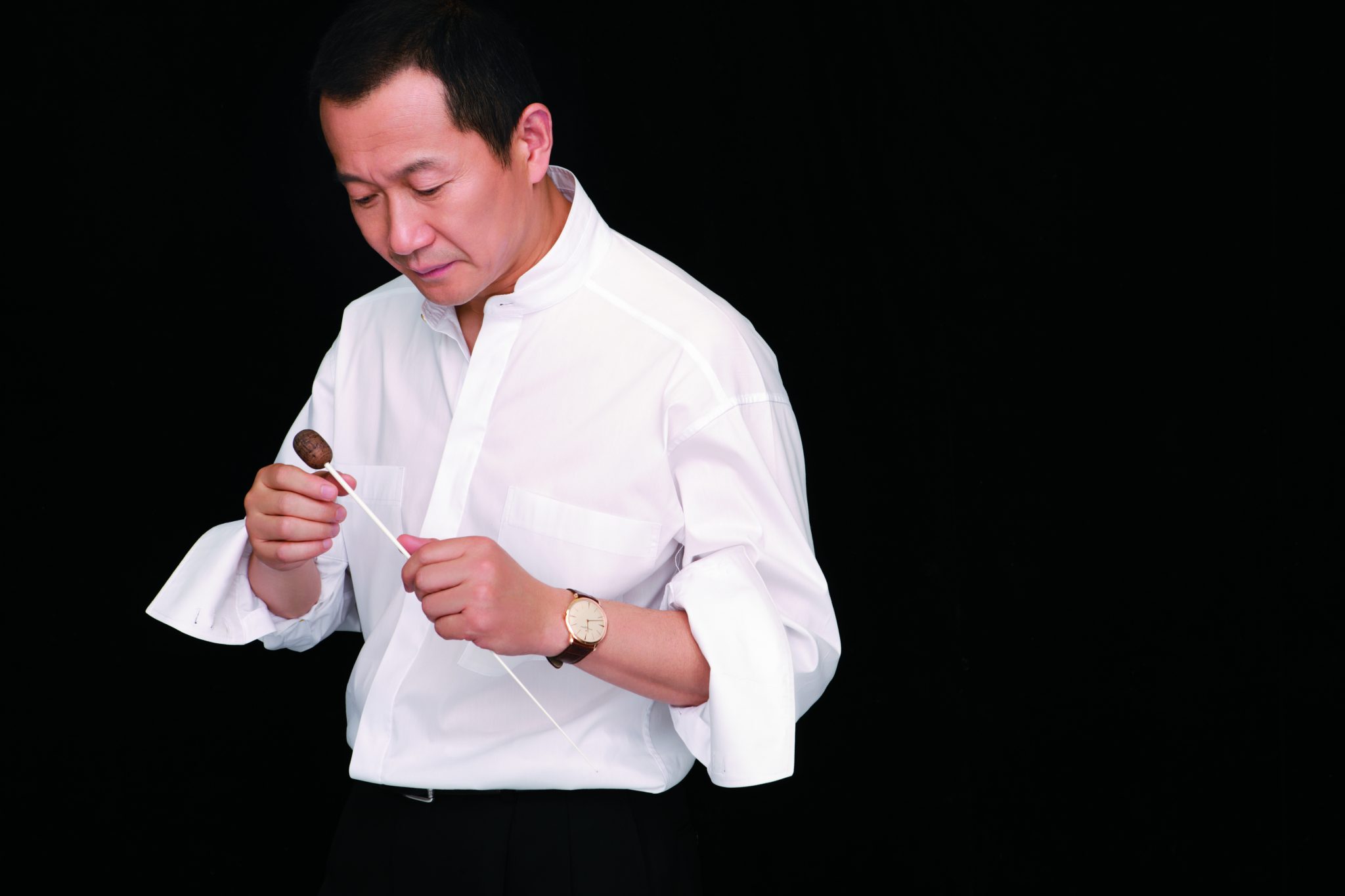 You may not know the name Tan Dun but you’ve almost certainly heard his music. He is the composer of the score for the record-setting Ang Lee film “Crouching Tiger, Hidden Dragon” (2000) in which he managed to work a miracle: to write a compelling film score that stands on its own without overshadowing the film, and to effectively bridge the gap between Western classical music and traditional Chinese music.

There are many composers who work to blend musical elements of East and West, of course, but few do it with the effortless grace and unified musicality of Tan Dun, a UNESCO Global Good Will Ambassador and arguably the most famous Chinese composer of his generation.

He grew up in a rural province in the middle of Mao Zedong’s Cultural Revolution, in which access to Western culture of any kind was greatly restricted and artists and intellectuals were routinely forced to give up their lofty pursuits and work in factories or on farms, often for years at a time.

But authoritarian regimes don’t last forever, and when the Cultural Revolution fell in 1976, Tan Dun went straight from working on a farm to the newly reopened Central Conservatory of Music in Beijing, where he encountered Western music for the first time (which must have been a dizzying experience).

Two years later, Dun was part of the Conservatory’s now-legendary first graduating class of composers, which included Pulitzer Prize-winner Zhou Long, Chen Yi and Xiaogang Ye, part of a group of composers who have put contemporary Chinese classical music on the international map.

On January 14 at the Harris Theater you have an extraordinary chance to hear Tan Dun’s “Crouching Tiger Suite,” featuring music from the film score, alongside the North American premiere of a new work, when the Chicago Philharmonic teams up with the Chinese American Museum of Chicago and guitarist Sharon Isbin to present “Concerto for Guitar and Orchestra (Yi2).”

This new piece continues the composer’s fascination with blending East and West by taking its sonic inspiration simultaneously from Spanish flamenco guitar and an ancient Chinese stringed instrument called the pipa.

This is a star-studded concert. Guitarist Isbin is a world-renowned champion of new music who regularly commissions important pieces from some of the biggest composers in classical music, and the soloist in his “Crouching Tiger Suite” is cellist Joshua Roman, who plays everything from classical concertos to Radiohead songs with flair, panache and chops to burn.

January boasts an embarrassment of riches for Chicago music. On January 18, the revamped Eighth Blackbird will take the stage at City Winery for a program that includes the “full-tilt, machine-like virtuosic barrage” of Andy Akiho’s “eRaSe” and Jonathan Bailey Holland’s “The Clarity of Cold Air,” inspired by the lovely winter weather we have here in the Midwest. The program also holds a suite of pieces, that include music by Nico Muhly, Pamela Z and Joan Tower.

There are two great, and very different, concerts happening on January 22. The Chicago Immigrant Orchestra will present a concert with jazz guitarist extraordinaire Fareed Haque at SPACE in Evanston. The Chicago Immigrant Orchestra was created in 1999 by the Chicago Department of Cultural Affairs and Special Events for the first annual Chicago World Music Festival. Directed by Willy Schwartz, the orchestra featured Chicago musicians from the immigrant community performing music from all over the globe and was a highlight of that first year.

That project lasted through 2004, but the orchestra was revived when DCASE approached guitarist Haque and oud player Wanees Zarour to restart the Chicago Immigrant Orchestra and headline 2020’s Chicago World Music Festival as part of Chicago’s Year of Music which was mostly virtual that year.

Under the direction of Haque and Zarour, Chicago Immigrant Orchestra musicians from the Far East to Western Europe, Africa and the Americas are intimately involved in the programming, which has led to some fascinating bills.

The Blue Violet Duo, who play the Epiphany Center on January 22, consists of violinist Kate Carter and pianist Louise Chan and has been crafting insightful programs since 2013. A frequent sight on the Dame Myra Hess concerts at the Cultural Center, this duo has a knack for finding overlooked gems from the past and combining them with engrossing works by living composers, including current CSO Mead Composer in Residence Jessie Montgomery. They are releasing a new album, “Strike, Strum and Stride,” featuring a nice mix of music by Stewart Copeland, Morton Gould, Gwyneth Walker and Irene Britton Smith.

On January 27 versatile trumpeter and composer Wynton Marsalis will join oudist and UNESCO Artist for Peace Naseer Shamma for a concert featuring the Lincoln Center Jazz Orchestra at Symphony Center. The concert features “a celebration of Arab music and the tradition of swing in a collaboration unlike any other.” I’m pretty sure I’ve never seen that pairing before so this promises to be a fascinating event. And two UNESCO artists in one month?! Let’s hope this doesn’t go to our heads.

In Beethoven’s late piano sonatas, the composer charts intensely introspective personal territory as his deafness isolates him first from other people and from then from mainstream musical influences of the time, and Leif Ove Andsnes is a celebrated interpreter of these difficult works. Even today, Beethoven’s Thirty-first Piano Sonata still sounds like it comes from another world.

Janácek was an ardent Czech nationalist and his work is distinctly political in nature, in this case paying tribute to a Moravian carpenter who was bayoneted to death by Austrian troops during a 1905 protest. The work was originally in three movements, but Janácek, ever his own harshest critic, threw the entire work into a fire in a fit of self-doubt and destroyed it.

Luckily, the pianist who premiered it had made a secret copy of the first two movements, so two-thirds of this passionate, remarkable work have survived. This is a rare chance to see it performed live by one of the top classical pianists in the world.