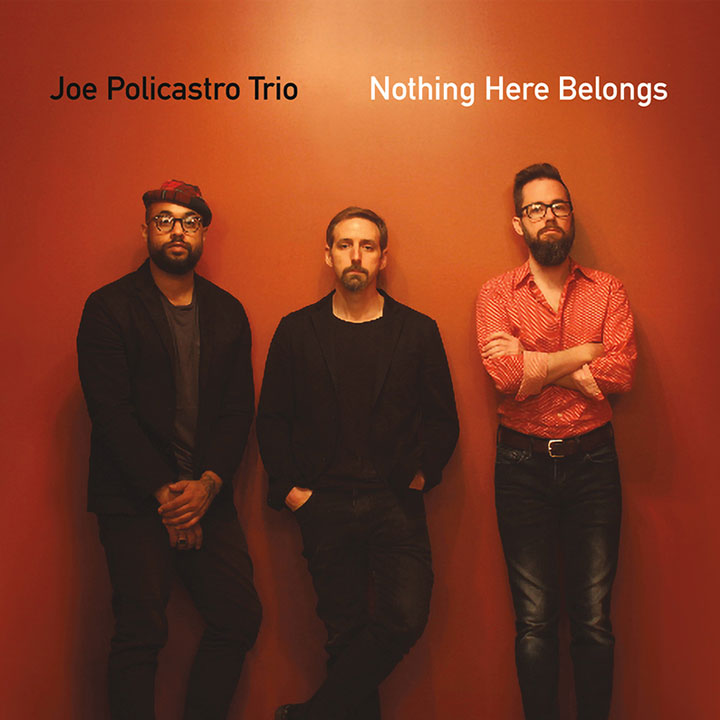 The fourth album by Chicago’s Joe Policastro Trio is a departure for the ensemble. Their previous releases were dedicated to expanding the jazz canon by reinterpreting music from theater music, film music and pop hits from previous decades. “Nothing Here Belongs” still engages in a bit of that, but the majority of the tracks are original compositions. The Trio is clearly flexing its creative muscle, and the result sparkles.

The set opens with a cover tune: Bruce Springsteen’s “I’m On Fire.” The original’s flame was of the low-burning variety, and the Trio follows suit, but with more languor than we’re accustomed to. Dave Miller’s guitar flows elegantly over the melody line, while bassist Policastro and drummer Mike Avery percolate behind him, creating an appealing frisson. When it’s Policastro’s turn to solo, he too, takes a nuanced, legato approach, even when Miller’s guitar-plucking kicks the solo briefly into reggae territory.

“Speak Slow(ly),” the first original tune, follows, and we can tell the title’s tongue-in-cheek, because right out of the gate we find Miller “talking” a blue streak—his fretwork nearly tripping over itself. All the soloists blitz their way through the tune, which manages to run right up to the edge of hysteria, then edge effortlessly back into sheer, arm-waving happiness. You can read it as a response to the steady simmer of the Springsteen, but it works just as well on its own.

It’s not the only notable pairing of a cover tune with an original. The Trio’s own “In The Quiet” finds them in a more reflective mode, with Avery laying down a carpet of snare over which Miller fans out some lovely, expansive chords. But the piece gradually builds in intensity, almost as though enforced serenity makes the players increasingly itchy or restless… so much so that the next cut, “The Wandering Sea,” a cover of Santo & Johnny’s 1959 hit instrumental, feels like a burst of sheer exuberance. The players add bravura sonic signatures to their reading, like the aura of fuzz that Miller ends up shrouding his performance in.

My favorite of the original tunes may be “Oceans of Notions,” where Avery clearly enjoys himself, chattering and clicking and rattling at Miller’s breezy guitar theme; he’s like a terrier running between Miller’s legs as he ambles along. But the album’s standout is the closer, a cover of Talking Head’s “This Must Be the Place (Naïve Melody).” Avery makes the iconic opening lick his own with just an occasional bent note or inflection. The Trio’s version maintains the lightness of the original, but drives it to a heady resolution that’s glorious fuzzy and furious. And Policastro’s own performance here is exemplary; he lays down the rhythm with both deftness and power, but also manages a few moments of lyrical subtlety. Long story short, “Nothing Here Belongs” belongs in your library.

“Nothing Here Belongs” is available for purchase or download from the usual sources, including Joe Policastro Trio’s website.