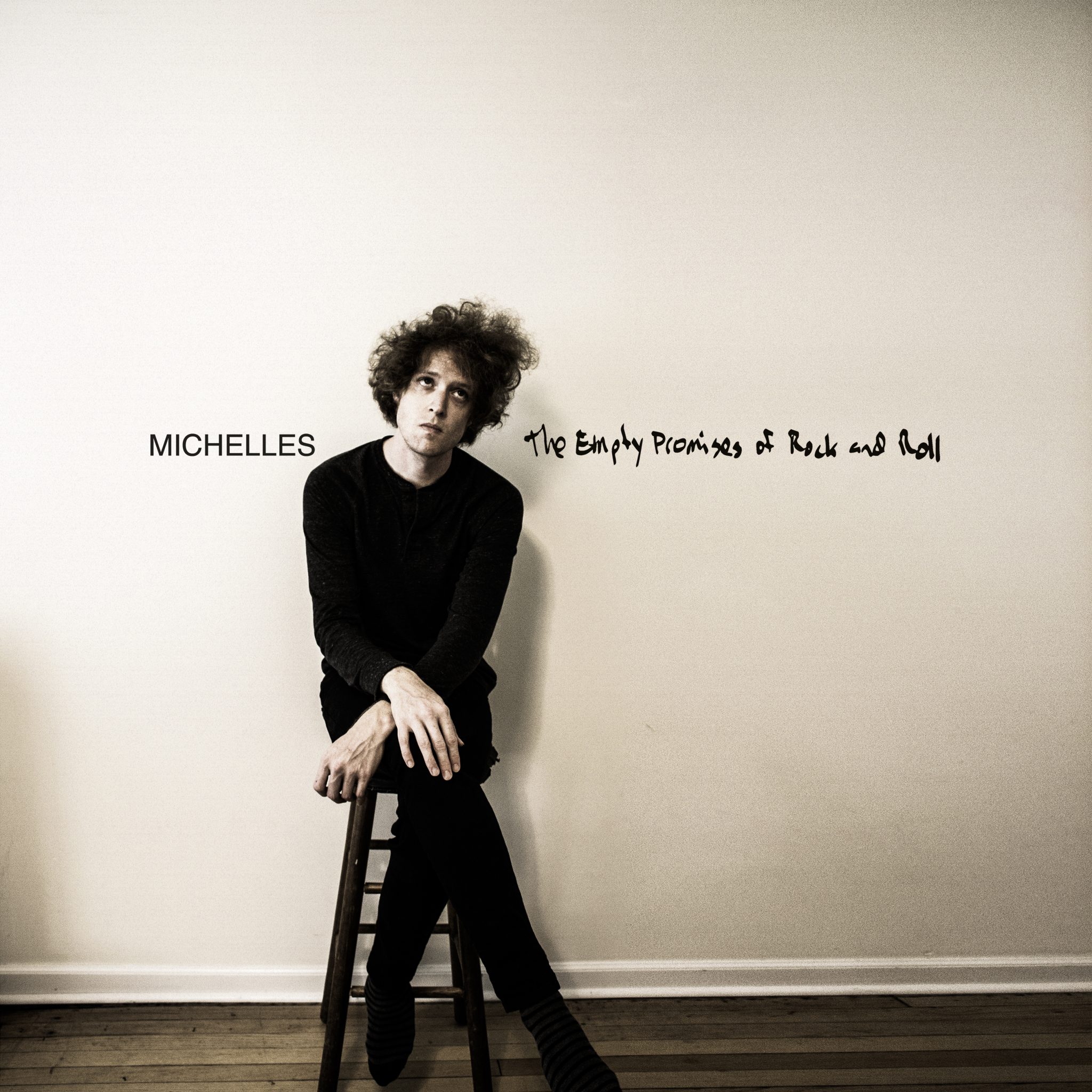 The singer-songwriter Michael Daly has released his third album as Michelles—a project he describes as “dream pop for the nightmare inclined.” Its title is “The Empty Promises of Rock and Roll,” and in fact the cover shows what appears to be a world-weary Daly, all in black, slumped on a stool like a postmillennial Hamlet. You’re prepared for some full-bore melancholia.

Imagine your surprise, then, when the first track kicks in with an utterly charming melodic riff, which lilts you gently into a lovely, witty tune about not fitting in—something, I expect, that defines the early years of every rock musician (hell, every musician, full stop). Describing an impromptu and ill-advised attempt by his dad to bond with him over some outdoor ball-tossing, Daly sings, “He said ‘Son you’re just too soft / For this world / You might as well start dressing like a girl / ’Cause not everybody’s gonna get it’.” It sounds wounding on the page, but Daly gives that line—“not everyone’s gonna get it”—such a triumphal setting, and he repeats it with such bravado, that it comes off almost as a boast—an announcement of early exceptionalism. There’s even a big, shameless key change at the song’s end to bring it home; you can imagine people launching to their feet in an arena somewhere.

Throughout this wonderfully inventive and endlessly droll album, Daly tacks between despair and delight, profundity and play; if he really were Hamlet, faced with the dilemma of whether to be or not to be, I’m pretty sure he’d choose both.

Daly spent five years on the album—reportedly recording and then scrapping entire sets—and that diligence and perfectionism has more than paid off. For Michelles aficionados, the most immediate observation is that he’s traded the low-fi soundscape of his last album, “Dark as a Daisy,” for a sparkling, multilayered palette. In a recent interview, he allowed that psych-pop might be an appropriate pigeonhole; for me, baroque pop is a closer call. But like all the best projects, this one evades easy classification.

Daly plays every instrument on the album, with the exception of drums (provided by Ryan Farnham), and he’s in top form throughout; I especially liked his ferocious, out-of-nowhere guitar solo on “Cruel Surprises.” The only potential stumbling block is his singing. He’s got a small, compressed voice—even his press materials note its similarity to Bob Dylan’s—which nestled comfortably into the stripped-down aesthetic of Michelles’ previous outings. It’s not as natural a fit here; you can more easily see Daly singing Appalachian folk, or French chanson, than the kind of majestic constructs he’s produced.

But on repeated listenings, you pick up the nuances in his vocal performances, and eventually you can’t really imagine anyone else taking on these tunes. His line readings are so beautifully wry and funny; there are moments that still make me laugh out loud. (“The stars fall,” he sings in “Illusions,” “And the birds take flight / They’re not the smartest / But they’re doing it right.”)

On the crunchy, driving “Walk by the Lake,” Daly sings:

What do you want to do today
We could take a walk down by the lake
We could try and mend mistakes
Or kill ourselves or frost a cake
Go find a hopeless soul to break
What do you say?

In “Can We Get a Smile,” he warns, “Peace of mind is hard to get / But in the meantime put your poncho on / It’s going to get wet.” But the acid quality of these tunes—and the Beatlesesque “Xmas Morning,” to name another—is at least partially leavened by flutterings of hope in the final moments. And in tracks like “This Tune’s a Circle,” cynicism gets quietly shown the door (“It’s all a game / That you’re meant to lose / It’s all a game but / You can still choose love”).

One of the loveliest moments comes at the end of “Cruel Surprises,” when Daly sings:

In that final “Just let go,” each word is sustained—the first pair for two beats, the third for four—and ascends from a Bb to a D to an F—which, over the G in the bass, forms a complete G-minor 7 chord. It’s simple, but it’s ravishing.

Some care—I’m guessing obsessive—has been taken about the order of the tracks as well. Listening to the album in its entirety can be a cathartic experience, with the final passage (in “All New to You”) finally succumbing to unadulterated, unapologetic bliss in a way that I found deeply moving.

“The Empty Promises of Rock and Roll” reminds you of what record albums are capable of being: complete, coherent artistic statements that take you on a journey that’s somehow both carefully mapped and thrillingly uncharted. The irony of Daly’s state-of-the-soul chronicle is that he subverts his own title; for the listener, at least, the promises here are far from empty.

“The Empty Promises of Rock and Roll” is available through the usual channels, including Michelles’ Bandcamp page.