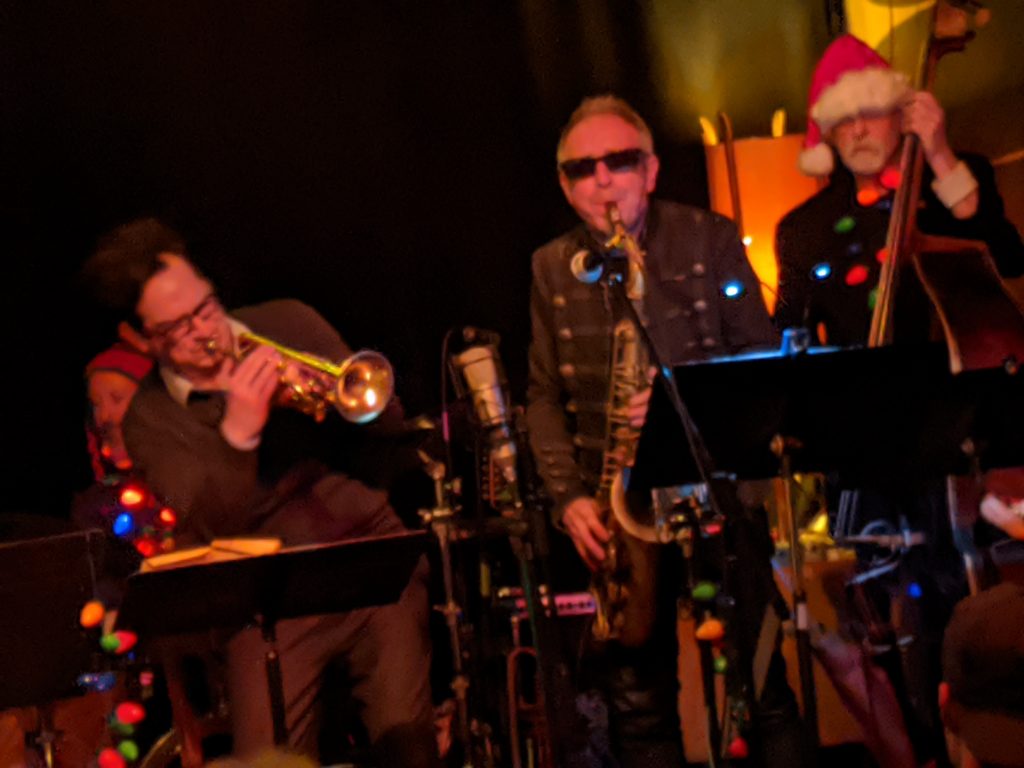 One of Chicago’s singular holiday traditions is “An Ayler Xmas,” orchestrated by one of our treasured, genre-defying musicians, reedist Mars Williams. Williams is known locally and globally as an accomplished experimental jazz musician, leader of the funk band Liquid Soul and perhaps most widely as the saxophone player for The Psychedelic Furs. For the holidays’ past twelve holiday seasons, he’s gathered friends and jazz royalty from Chicago and around the world to create, as he puts it, “an experience like no other holiday performance,” featuring improvised takes on classic Christmas carols as well as a couple of Hanukkah tunes. It is not “your [parents’] Christmas music,” Williams says wryly. While hard to put into words, it’s one of the most exhilarating, suspenseful, elevating and fun musical performances of any genre during any Chicago year. Fair warning: all that energy can be noisy—but it’s a joyful noise.

Albert Ayler was an acclaimed avant-garde saxophone player whose novel work explored divine and spiritual sensations. For the “Ayler Xmas” concert, Williams and his colleagues (Josh Berman on cornet, Jim Baker on piano, viola and Arp synth, Krzysztof Pabian on bass, Brian Sandstrom on bass, guitar and trumpet, Steve Hunt on drums and Peter Maunu on violin) present a mash-up of approachable holiday melodies with Ayler’s squonky, swanky works, finding commonality and tonality between seasonal carols and Ayler’s ethereal themes. A familiar composition like “O Tannenbaum” or “The Twelve Days of Xmas” serves as a springboard from which Williams and his comrades launch into improvised free-jazz territory, which is sometimes layered atop the original, sometimes not. The resulting musical possibilities are endless—and at times may be harmonic, dissonant, rhythmic, peaceful or chaotic. The journey may bring the group back to the original structure, as with “five golden rings,” or perhaps segueing instead into something new. Whether the resulting reaction is recognition or wonder, not smiling is not an option.

You don’t need to be a jazz aficionado to appreciate how creative energy and holiday spirit can reify standards we love, but tire of from Muzak and overexposure. As Williams says, all you need is “an open mind” to let the melodies transport you to some other beautiful place. “If you are willing to be exposed to something new, just come and check it out.”

All you need to check out “An Ayler Xmas” is an internet connection. The ensemble will stream live from Constellation on December 18 and 19, for a pay-what-you-can fee. While the synergy of performers feeding off of the audience’s reaction is absent without a live audience, Williams knows that once the group gets going, they’ll be in the moment, interacting with each other and channeling the energy and joy of creation and holiday camaraderie. Friday’s performance in is bound to receive international attention, as it is co-sponsored by Montréal festival Suoni Per Il Popolo, the Vancouver International Jazz Festival, the TONE festival in Toronto and the Ars Nova Workshop in Philadelphia. Like many of Chicago’s greatest musicians, Williams’ recognition is global.

The improvisational jazz bloodline runs thick within Williams. He carries the influences of the Association for the Advancement of Creative Musicians and the Art Ensemble of Chicago, which sparked his interest in finding different sounds and approaches back in the seventies. Artists like Douglas Ewart, Henry Threadgill and Roscoe Mitchell sparked his interest in self-created and small or toy instruments. At some point during the shows, Williams and percussionist Hunt will be playing those toy instruments, many gathered by Williams on his travels.

Williams has also released an album to coincide with the event, “An Ayler Xmas Vol 4: Chicago vs. NYC,” which showcases 2019 performances in Chicago (with an intense, boom-boom-boom power) and New York City (more patient, yet with strong dynamics).

“An Ayler Xmas” streams December 18 and 19 at 8pm from the Constellation website. “An Ayler Xmas Vol 4: Chicago vs. NYC” is available at Mars Williams’ website.